Every month, we feature an employee at Lab651. We want to celebrate our unique and creative group – as well as let you get to know the team behind the IoT magic!

Here’s what he shared with us:

1 / What’s the best piece of advice you’ve ever been given? Wow, this is a tough question. I’ve been blessed to have so many amazing mentors over the years. Everyone from my parents, aunts, uncles, and other family members to business professionals that took me under their wing and gave me candid advice and feedback both in my profession and business. As I reflect, there are thousands of quotes that I’ve read or been told and have been instrumental in my career. Advice for one situation in my personal life doesn’t apply to professional and vice versa. I guess if pressed, there’s two that I would focus on, one is for my personal growth and another for my professional growth.

For my personal growth, I recall my dad at one point telling me, “Justin, you’ll feel more fulfilled and satisfied in your career by applying your mind, rather than your muscles to solve problems.” 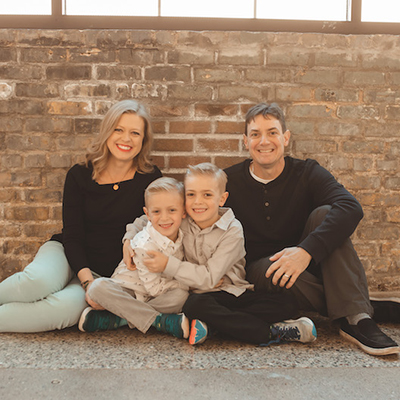 This idea that I could use my brain, to create something new and solve problems not yet solved AS A CAREER, really inspired me. I majored in Applied Math and Physics in college because not only did I find it boring to “solve for X”, I wanted to use the tools of Math and Physics to solve REAL WORLD problems. While for me it’s software, data, and Emerging Technology that inspires me today, this mindset applies to anything I wish to learn. A person that doesn’t use their creative mind has a much greater chance of being replaced by automation, machines, and less-skilled workers than someone who has a creative and inert talent that can’t be replaced and is able to continue to remain relevant in the world today.  I believe this then ultimately feeds into satisfaction and positive experience in what you are doing with your life.

From a professional growth standpoint, I’ve recently been listening to and watching a lot of videos from Kevin Hart. He’s written a number of inspirational books, interviewed on podcasts, and speaks the truth. One of his recent quotes I read was, “Be loyal to those who help you grow. You got a team, you keep your team together, you run as a unit. You got a team of people, it means they believed in you, they bought into your dream. That means they invested in you, they invested time, energy, and effort. In return, you gotta invest your vision and promise them that we’re all going to win together.” This is inspiring and wise advice to me and the philosophy that leaders should always hold as they build the next thing and move forward. Be humble.

2 / 60s, 70s, 80s, 90s: Which decade do you love the most and why? I’m totally an 80’s guy. Even to this day. I guess it’s probably because during the late eighties is when I left junior high and started high school. That’s always a time of change and for me, it was fun and exciting. It was also a time of more freedom and responsibility and the first steps of my parents allowing me increased free will to do what I wanted. My wife doesn’t like it when I joke about this, but I still threaten that at some point I might regrow my mullet and go back to wearing a jean jacket and sporting a walkman if that ever comes back into style.

3 / What was the last concert you went to? Having kids really slows down the nightlife for parents. Throw in a dose of the current COVID-19 pandemic going on with no bands playing for months and the last concert I went to was Frank Turner & The Sleeping Souls back in late 2019. I heard them perform on MPR and on a whim bought tickets for my wife and me to go. Having only heard one song going into the show, I was a little worried about what else they might play, but it was awesome! We saw them at the Pantages Theatre, which while not as small as something like First Ave, still was intimate enough that you get a good sense of the band and was able to feel more connected than a huge arena. I wish I had time to attend concerts and while writing this, I hope it inspires me that when the bands start touring again that I will continue to randomly purchase tickets for bands coming into town. Personally, in 2021, I need to work on getting out and seeing new music. If anyone has suggestions on how they find new music or places to see live bands as most bands are going online these days, please let me know!

4 / Who was your role model as a kid and why? Tons of role models existed for me from a young age to my teenage years. Many of them I didn’t know their name growing up, but it turns out growing up in the ’70s and 80’s people like Steve Jobs, Bill Gates, Pele, Christa McAuliffe, Michael Jackson, Tony Hawk and too many to name other popular cultural figures played a role in shaping who I am today.  In my high school and college years, as I was playing drums, Neil Peart from Rush was definitely someone I would say I connected with as a role model. While not only arguably one of the best drummers in the world, he wrote a number of books on his life and struggles that I found fascinating. He also wrote the lyrics for nearly all of the songs by Rush. From a technology lens, a close runner up is Linus Torvals, the creator of the Linux operating system. He sparked the movement for an open-source operating system and built the modern source repository Git. I also can’t talk about the personal computer revolution without tipping my hat to Steve Wozniak. What he was able to accomplish in the early days of Apple is nothing short of a miracle.

5 / What do you think is the most exciting technological advancements in the coming decade? The continued rise of Artificial Intelligence and IoT. As “Things” in our home, business, and city continue to get smarter and smarter, I believe we have just scratched the surface on what new and unique offerings companies are going to be able to bring to market. We are still in the infancy of stitching together the best way to use AI and IoT, but these advances are only going to get better in their applications and I’m super excited for what’s ahead in the coming years.

6 / What was the last book you read? I’m always hopping around to various books, more specifically audiobooks as I do a lot of running these days, but I would say, the last book that I finished was “The Decision” by Kevin Hart. It’s a great book for personal wellness, looking at yourself and how your life and advice on keeping your mind and body strong. For a mind-blowing book, I would highly recommend is Sapiens. I was blown away. Sapien changed my entire perception of the evolution of humans with a fact-based and common-sense account of how we got to where we are today and the trajectory of our species.

On the topic of books, here are a few others that I recommend reading or listening to as they are all on Audible. I really can’t recommend Audible enough if you can’t find the time to sit down and read.

Finally, one of the most influential books that I have read in the past year was the 5 am Club by Robin Sharma. It’s a tale of two people meeting an eccentric billionaire and going on a journey to improve their lives. The thing that I found most interesting about the book is that it has real-world tools and techniques that I have found to have an impact on my performance and perception of life. While I don’t follow all of them, all of the time, I can honestly say that it has helped put me in a better place in 2019 and into 2020 than where I was in 2018 by owning my morning and spending the first part of the day on myself before anything else.

One of the quotes that I enjoy from the book reads, “Small, daily, seemingly insignificant improvements, when done consistently over time, yield staggering results⁣”.

My advice to anyone reading this is to keep plugging away at your goals one small step at a time and you will achieve mastery. As Oscar Wilde, the famous poet and playwright once wrote,

“Be yourself; everyone else is already taken.” – Oscar Wilde